Participation of Fr. Provincial in the the 31st general assembly of the KRLCC

Fr. Provincial Jaison Kaimathuruthil OCD participated in the 31st General assembly of the KRLCC. The 31st general assembly of the Kerala Regional Latin Catholic Council (KRLCC) was held in Thiruvananthapuram on January 13 and 14. Union Minister of State for Tourism and IT K.J. Alphons inaugurated the assembly at Carmel Girls’ Higher Secondary School in Vazhuthacaud on Saturday. KRLCC president Archbishop Soosa Pakiam M. presided the assmbly. Provincials from different orders and various congregations also gifted their valuable presence for the enrichment of the assembly. They visited and consoled the victims of okhi cyclone. 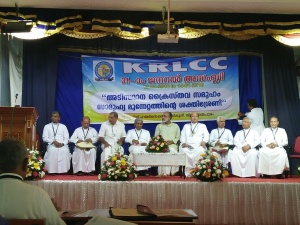